Live exports and the Australian community: A national survey

Some sectors of the community believe the livestock export industry has poor animal welfare practices, and are very vocal in their opposition to the trade. This can put pressure on decision-making by politicians and regulators.

The industry has contracted an independent third party to conduct research, based on a solid scientific approach, to survey the community and understand its views on various facets of the industry.

This report outlines the findings of the first in a series of annual surveys to determine the key issues in community attitudes towards animal welfare in the Australian livestock export industry.

The results show that, while many people are concerned about animal welfare, many also recognise the contribution of the industry to farmers and regional Australia, and to food security overseas.

This project aims to use Voconiq’s social insights framework to survey around 5,000 Australians each year, to assess community sentiment toward the livestock export industry.

This project will ensure politicians, livestock exporters and others have a factual basis for understanding what the community thinks about livestock exports, based on a representative survey of Australians.

People interested in participating in future years may pre-register to be contacted by Voconiq when the next Australian live export industry survey is released. 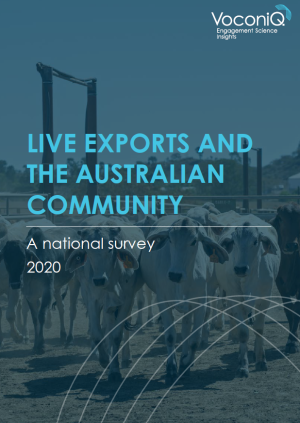