Ammonia has been identified as a possible indicator of animal welfare during the livestock export process.

This project monitored ammonia and other potentially noxious gases in one sheep assembly depot and on two sheep voyages on the same ship from Australia to the Middle East. It also examined the physiological and behavioural responses to 15-45 ppm ammonia in sheep and cattle in a simulated 12 day ship voyage.

This is the second of a two stage series of reports. Stage 1 involved a survey of stakeholders in the livestock export industry to evaluate their opinion of welfare indicators for ship-transported sheep and cattle. 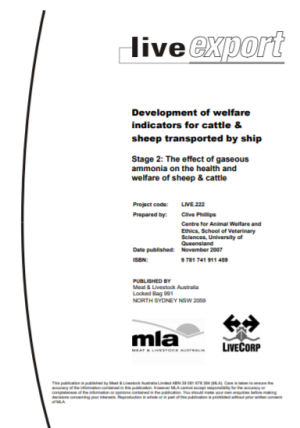