Animal welfare is an important issue for Australia’s livestock export industry, in terms of both economic returns and community attitudes. Meeting the demands of industry, consumers and the broader public for sustainable and ethical animal production requires a proactive approach to ensuring the welfare of all the animals.

The project included a literature review, including current standards and regulations for livestock exports, and a survey of 921 people within the industry and external to it regarding indicators of animal welfare. From the results, a number of welfare indicators were recommended for use in the livestock export industry.

The findings of this project will be used to guide the development of a set of animal welfare indicators which may assist in identifying potential issues early, allowing changes to management practices that avoid problems developing, and encourage continued improvement amongst those caring for animals.

This project aimed to identify existing measures and indicators for the welfare of sheep, cattle and goats in Australia’s live export supply chain, and internationally accepted indicators, and develop a method to benchmark the current welfare performance of the livestock export industry. Indicators needed to be important, practical, economical, measurable and quantifiable, and demonstrate industry’s commitment to animal welfare.

A widely advertised online survey was completed by 921 people, with 26% identifying themselves as working in the livestock export industry. The other 74% were classified as ‘public’, with 41% of these indicating they were animal welfare advocates. The survey showed:

Understanding the values and beliefs of industry, consumers and the broader public is critical for providing reassurance about the treatment and welfare outcomes of animals exported live from Australia. The development of internationally accepted, practical and quantifiable animal welfare indicators will also allow continued improvement in livestock management and animal welfare. 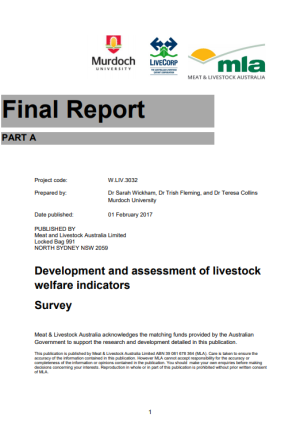