Mortality is currently the principal indicator of animal welfare used within the Australian livestock export industry. However, as this only measures extreme events, there is a need to identify additional indicators for sheep and cattle in pre-export depots and being transported by ship.

This is the first of a two stage series of reports. Developing alternative methods of measuring animal welfare on ships - Stage 1Stage 2 monitored ammonia and other potentially noxious gases in a sheep assembly depot and on two sheep voyages, as well as monitoring behaviour in cattle and sheep exposed to different levels of ammonia. 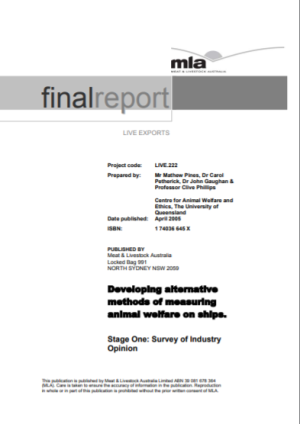