The Australian government, livestock industry (including producers and veterinarians), media, animal welfare groups and the general public have shown a keen interest in the care and welfare of sheep, cattle and goats being exported from Australia.

Each year, the Australian livestock export industry provides a breakdown of how many sheep, cattle and goats were exported, the month that shipments left Australia, and the sea ports or airports where livestock were loaded and unloaded. This includes details of how many animals were safely delivered and how many died along the way, but does not specify the cause of death.

This project summarised the performance of the Australian livestock export industry in 2018. The number of sheep exported by sea dropped by more than a third compared to the previous year, due to a moratorium on exports during the northern hemisphere summer.

The performance reports provide consistent, comparable data that can be matched against previous years. This acts as a gauge of how the Australian livestock export industry is performing and encourages continued improvement.

This project provided data regarding sheep, cattle and goats exported live from Australia during 2018 by sea and air, including time of year, age and sex of the animals, and the number that died during export.

The collection of this information has enabled the long-term mapping of the Australian livestock export industry’s overall performance year on year.

Other key findings of interest include:

Ongoing analysis of the performance of the Australian livestock export industry, especially in areas of key interest such as the welfare of animals, provides valuable data that enables continued improvement in management practices.

The restrictions placed on sea transport of livestock during the northern hemisphere summer introduced in 2018/19 mean that long-term databases have been irretrievably disrupted. The industry’s regulation is also shifting emphasis from mortality (deaths) as a measure of performance to the recording and analysis of various animal welfare indicators. It is recommended that any further reporting include measures such as welfare instead of just mortality. 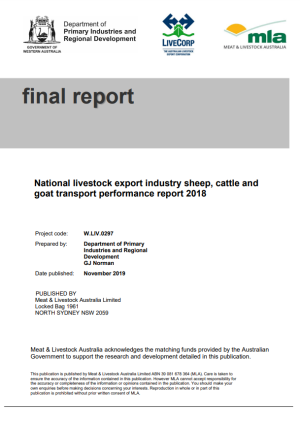