Strategies to reduce inanition in sheep

Inappetence, or the reduction or lack of appetite, has been identified as a problem for sheep in the live export process. It can contribute to death from inanition, and is also associated with the development of Salmonella outbreaks and subsequent death of animals.

Sheep were monitored at a pre-embarkation feedlot in Western Australia using RFID tags and specially-designed tracking antenna to determine the time they spent at feed and water troughs.

The patterns of feed and water consumption of 8,206 sheep from four export consignments were monitored for a range of 6 - 31 days. Inappetence was defined as sheep spending less than 28m 5s at the feed and water troughs. It took until day six in the feedlot for more than 95% of animals to be spending adequate time at the feed trough.

Mortality of the monitored sheep was 0.85%, with enteritis (primarily salmonellosis)/inanition as the leading cause of death. Other causes of death included pleuropneumonia and transit tetany. However, statistical analysis showed that it was unreasonable to use feeding times to predict mortality in sheep at the feedlot.

Housing sheep outside the raised sheds, with access to hay or pellets, for a day before entering the sheds, did not hasten feed acceptance or increase the number spending an acceptable period at the feed troughs, compared to those housed only in the shed. The addition of oats over the pellets also did not result in any difference in uptake compared to sheep that were fed pellets alone.

Spreading of chaff once per day over the pellets did alter the feeding pattern, which sheep visiting the feed trough more often but for shorter visits, than those given only pellets. The on-farm provision of trail fed pellets for several preceding days, or the feeding of hay the day before trucking also did not increase the time or number of visits at the feed troughs.

Further research is warranted to explore management practices that improve the resilience of sheep to novel conditions and feeds, resulting in the consumption of a pellet diet at pre-embarkation feedlots in preparation for shipping.

Investigating the relationship between Salmonella-inanition and property of origin 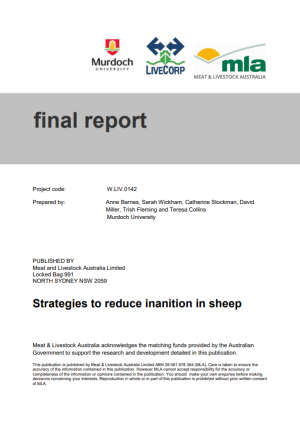