Infectious Ovine Keratoconjunctivitis (IOK), Pink Eye, has a significant impact on rejection rates of sheep for live export and thus the feedlot and live export industries in Western Australia. The study aimed to determine the flora and sensitivity to antibiotics of eyes from sheep showing clinical signs of IOK. A diverse range of flora was isolated from eyes of sheep. Of the 352 eyes sampled, up to 37 bacterial species were detected, with the highest number of 28 found in affected eyes (those showing clinical signs of IOK), compared to 23 in unaffected eyes (those showing no clinical signs when the contralateral eye was affected), 11 in apparently healthy eyes (rejected sheep showing no signs of IOK in either eye but having mixed with IOK sheep) and 19 species in control sheep eyes (non reject healthy sheep showing no clinical signs of IOK in either eye). In sheep in a pre-export feedlot, the most commonly isolated organism in affected, unaffected and apparently healthy eyes was Moraxella ovis. Mycoplasma species was the second most commonly isolated organism from affected eyes and apparently healthy eyes, and this species was isolated less frequently in unaffected eyes. Mycoplasma spp were isolated at rates of less than 5% in control eyes. Seven treatment regimes were tested. The greatest clinical improvement was obtained when sheep with clinical signs of IOK were treated with long-acting oxytetracycline at a dose of 20mg/kg bodyweight injected into the neck muscle and if clinical signs were still present after 4 days, a second injection at the same dose rate was administered. 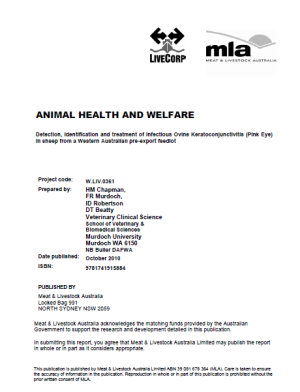