A trial of dehumidification technology on an empty livestock export vessel has shown that it can be effective in reducing temperature and humidity, but not at the level that makes it a practical solution at the moment.

In a first for the industry, its research and development body LiveCorp ran a series of tests in the Middle East on an empty ship to evaluate dehumidification units in realistic operating conditions, as part of a wider project looking at ways to mitigate the risk of heat stress.

“In a little over six months, we’ve developed the methodology, chosen and shipped the equipment to Dubai, run the trial, developed a model using the data, and analysed the results,” Mr Brown said.

“We consider the trial a success, and the data that’s been collected will be invaluable in guiding further research. However, the modelling of what happens when you add sheep into the equation shows you would need technology able to deliver around three times as much dry air to remain effective.”

Sheep generate heat, making it hotter on the deck of a vessel than it is outside. The industry currently uses highly effective ventilation systems to blow fresh air through the decks to draw away heat as well as carbon dioxide and ammonia.

“While the model shows dehumidification can be more effective than the fans alone at higher temperatures, there’s no way a vessel could carry the number of units that would be required for all decks. To be viable, consideration has to be given to weight, size, and the amount of power being used,” Mr Brown said.

“We don’t have an immediate solution, but the project will provide enduring value to the industry and guide future investment into heat stress management.

“The trial has provided significantly more accurate performance specifications of what may be required, including greater dry air outputs per unit and the potential to introduce an element of cooling to leverage the impact of the dehumidification. The publicity has attracted the interest of technology providers, and LiveCorp will continue to review credible alternatives being put forward.

“We’ve also gained a better understanding of the research that’s needed to fine-tune the model, such as exactly how much heat is generated by sheep, and how much air movement is needed across the pens to remove gases and heat.”

The dehumidification trial was funded by a grant from the Australian Government. 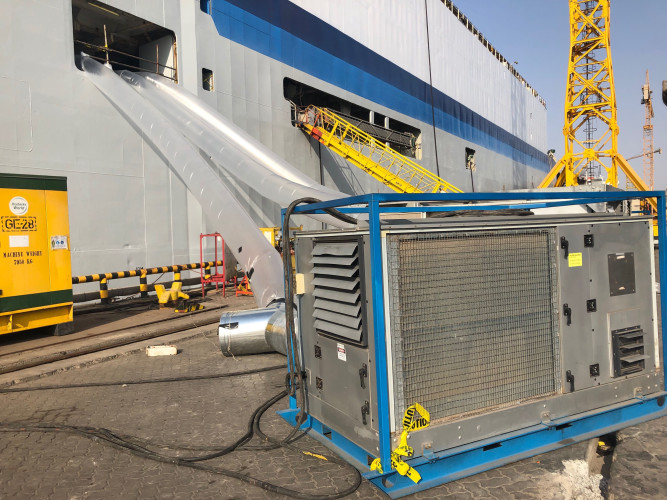